Nearly 100,000 residential properties up for grabs at carnival 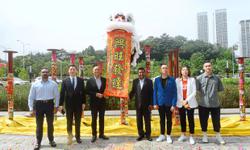 First-time homebuyers residing or planning to move to Penang, Perak, Kedah and Perlis may benefit from incentives offered by the government to own their own houses.

"Visitors will get to enjoy promotions to own more than 92,000 units of houses still available in the northern region.

"These are the offerings from 1,253 developers in the region offering a total 232,000 units of houses

"According to the National Property Information Centre (Napic), Penang itself has almost 6,000 units of unsold housing apart from 2,600 units in Perak, over 2,400 units in Kedah and 67 units in Perlis," he said after launching the event Friday.