By Wani Muthiah and Joseph Kaos

SHAH ALAM: The main gate of the Shah Alam Court Complex saw a crowd gathering as early as 6.45am on Friday (Sept 23) with people arriving to gain entry into the premises.

The crowd was mostly made up of journalists and photographers waiting to collect their passes to cover Datuk Seri Dr Ahmad Zahid Hamidi's graft trial.

There were also members of the public who had cases to attend but were told they they would be allowed to enter the court complex only at 8am.

By 8.30am, a big group of the former deputy prime minister's supporters had gathered near the main gate.

Some were holding banners indicating their support for Ahmad Zahid, who is also Umno president and Bagan Datuk MP.

There were supporters who had come from as far as Terengganu.

Coach buses, believed to have ferried the supporters to the location, were also lined up on the main road near the court entrance.

Ahmad Zahid will know today if he can walk away a free man or would have to enter his defence for the graft allegations levelled against him.

The 69-year-old political veteran was accused of accepting bribes from Ultra Kirana Sdn Bhd (UKSB) during his tenure as home minister in order to extend the company’s contract to continue operating the one-stop centre in China and the Foreign Visa (VLN) system.

Ahmad Zahid's defence team, as well as the company's directors, claimed the money was political donations, while the prosecution rebutted the claim saying if it was indeed a donation, it would be a one-off payment as opposed to the monthly payments he allegedly received from UKSB.

Here is the timeline of the day's events:

12.07pm: Teary eyed, Ahmad Zahid steps out of his vehicle to greet and thank his supporters as they chanted "Allah Selamatkan Kamu". He then joined them in a prayer.

12pm: Ahmad Zahid mobbed by a crowd as he leaves the court building after a brief press conference thanking his lawyers, family members and supporters.

11.37am: The High Court acquits Ahmad Zahid Hamidi of all 40 graft charges in the Foreign Visa System (VLN) case.

9.24am: Proceedings have begun in the High Court, which will determine whether to acquit or call for the defence of Datuk Seri Dr Ahmad Zahid Hamidi over 40 charges of graft involving the Foreign Visa System contract. The court convened with Judge Mohd Yazid Mustafa on the bench.

9.02am: Among those spotted lending support was former Umno supreme council member Datuk Lokman Noor Adam, who took pictures with supporters the moment he arrived.

8.45am: Datuk Seri Dr Ahmad Zahid Hamidi arrived at the Shah Alam Court. He got out of the white Toyota Vellfire he arrived in to greet his supporters gathered outside gates of the court complex. The supporters chanted "Bebas Presiden!" while he shook hands with them. 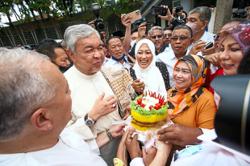