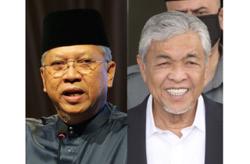 New movie: Annuar (second from left) speaking to director Feroz Kadir and part of the cast of ‘Seratus’. — Bernama

The Communications and Multimedia Minister said many misinterpreted Datuk Seri Dr Ahmad Zahid Hamidi’s statement as a sign of Barisan’s alleged insensitivity towards the welfare of the people in pursuit of political goals, which is untrue.

“The statement has been misunderstood, as no policy statement on the election has been officially released yet.

“What the president meant was that in the event of a flood, the Umno election machinery would still be ready to operate.

“It does not necessarily mean that he wished for the election to be held during the flood season,” Annuar said after launching the soundtrack and trailer for the upcoming film Seratus at the Communications and Multimedia Ministry yesterday.

Annuar added that Ahmad Zahid’s statement is a personal one and does not represent the party’s view on holding GE15 during flood season.

“It is very rare for a country to hold elections during a disaster. If we hold it during unfavourable conditions, the voter turnout will be low and this will not bring a good image for the country,” he said.

On Saturday, Ahmad Zahid said Barisan was willing to weather the floods and heavy rain if GE15 is held this year.

Yesterday, Ahmad Zahid said there should be no issue with calling a general election during the monsoon season as former prime minister Tun Dr Mahathir Mohamad did it in 1999.

BN keen to have elections soon 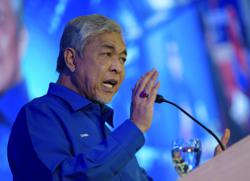