Facing the law: Ahmad Zahid covering his head from the rain as he arrives at the Shah Alam High Court. — KK SHAM/The Star

SHAH ALAM: Former deputy prime minister Datuk Seri Dr Ahmad Zahid Hamidi will know on Sept 23 if he can walk away a free man or would have to defend himself against allegations of graft in the Foreign Visa System (VLN) case.

High Court judge Justice Mohd Yazid Mustafa, who set the date to deliver his decision based on whether the prosecution had successfully proven a prima facie case against the accused, also directed both the prosecution and defence teams to file notes of their submissions by Sept 13.

Yesterday marked the end of both parties’ oral submissions after the prosecution closed its case.

He was also levelled with seven additional charges for allegedly procuring for himself S$1.15mil, RM3mil, 15,000 Swiss francs and US$15,000 in his capacity as home minister.

He was accused of committing the crime between October 2014 and March 2018 in his private residence in Country Homes, Kajang and his official residence in Putrajaya. 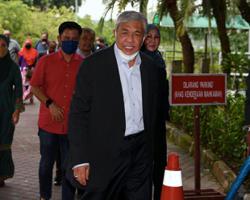