Judge Mohamed Zaini Mazlan also ordered that the prison time run concurrently from the date of judgment, which means that the former prime minister's wife faces 10 years in jail.

He also fined her RM970mil, in default 10 years in jail, if she fails to pay.

The court allowed a stay of execution on the sentence pending an appeal to the Court of Appeal.

The full text of Judge Zaini's verdict is available below. Below is a timeline of today's events.

4.50pm: Rosmah has left the KL High Court. Before she entered her car, she stopped and waved to the members of the media waiting outside. 4.10pm: The High Court has sentenced Rosmah to 10 years' jail for each charge, and the prison time is ordered to run concurrently from the date of judgment.

She is also fined a total of RM970mil for all charges, in default of 10 years in jail for each charge, to run concurrently, if she fails to pay. The court however allowed a stay of execution on the sentence pending an appeal to the Court of Appeal.

She was released on RM2mil bail that she previously paid when she was first charged in court four years ago.

3:42pm: Court stands down for Justice Zaini to deliberate on the sentence.

3:26pm: Sri Ram addresses the court. He says the punishment for Rosmah must be reflected by the gravity of the offence. He asks for a maximum or near maximum sentence for Rosmah, considering the size of the gratification in the case.

"This is a very serious case. On each charge, we ask to run concurrent, we ask for maximum or near maximum," he says.

On the fine, Sri Ram says the law provision provided for a fine of no less than five times the amount of gratification.

3:22pm: Jagjit is mitigating a lenient sentence for Rosmah. On the jail sentence, Jagjit is asking for a day in jail and for the jail time to run concurrently on the three charges.

"But if that is the conclusion, takpe lah," she says.

Rosmah breaks down while addressing the judge. She asks to be shown some humanity.

"If it happens to me now, it can happen to you.

"I am a victim of all this. They've done this to my husband," she says while wiping away her tears.

3:11pm: Rosmah is addressing the judge.

"I am very sad with what has happened today."

Rosmah speaks about her contributions to the country. "I was once the first lady, and I started Permata."

3:00pm: Jagjit is now mitigating for Rosmah prior to sentencing.

"She has an unblemished character, she has been of service to the nation," the lawyer said.

2:56pm: The High Court has found Rosmah guilty of all three charges.

Justice Zaini, in his brief decision, said that he has conducted a maximum evaluation in the case and found that Rosmah's defence was a bare denial and unsubstantiated.

"The prosecution has succeeded in proving its case beyond reasonable doubt.

"The accused is therefore guilty of all three charges," he said.

2:54pm: Rosmah walks into the accused dock and sits on the bench.

2:53pm: Jagjit tries to stay the decision pending an appeal to the recusal application. Justice Zaini says he is not persuaded and will continue to deliver his decision.

2:43pm: Justice Zaini has dismissed Rosmah's application to recuse him from presiding in her case.

12:50pm: Justice Zaini has heard from both sides on the recusal application.

"It's 12.50pm. I'm sure everyone is famished. I will deliver my decision (on the recusal application) after lunch," Justice Zaini says.

12:30pm: Datuk Seri Gopal Sri Ram makes his reply to the defence's submission. He says the main crux of the application is whether Justice Zaini's judgment would be independent.

"At issue here, is whether the system of judicial research which has been accepted and employed in several countries, such as the US, Australia and Singapore... The question is whether that opinion is the judgment of the court, whether it assists the judge in avoiding him of doing research which otherwise he had to do.

"The two documents are not an attempt to influence the decision of the court. They are opinions of the writers, opinions of judicial law clerks because it comes from the research unit," Sri Ram says.

The lead prosecutor says what is seriously troubling is the allegations made in the posts on Malaysia Today. He did not mince his words when he makes a direct reference to Raja Petra Kamaruddin, the owner of the portal.

"First, he's a fugitive from justice hiding somewhere in the UK. Secondly, he is a rogue journalist. Thirdly, his views alter according to how he is paid," says Sri Ram.

Earlier Jagjit describes the "leaked judgment" by the research unit as "trash".

"That is the most apt description for Raja Petra's post....trash. And that is what their application is based on.

"Even if your lordship requested for the opinion written by the research unit, even if you had gone through it and do your judgment, it would have been perfectly ordinary," Sri Ram adds.

Sri Ram, who is a former Federal Court judge, shares that during his time, the Chief Justice then had suggested for him to have his own research team.

He says he rejected the idea they would just get in his way.

"But that's just my way. Each judge has his own way," Sri Ram adds.

He says the prosecution respectfully calls for the court to dismiss the application and for Justice Zaini to deliver his judgment in Rosmah's case.

12:01pm: An exchange of words ensues between Justice Zaini and Jagjit on what the documents really meant.

"Since you want to call a spade a garden equipment, let's just get to the point. What do you call these documents?" asks the judge.

Jagjit replies, to put it bluntly and simply, it has been prepared at the request and behest of someone of authority.

Justice Zaini: Answer my question. What do you call this two documents?

Jagjit: I cannot label them but they are incriminating.

Justice Zaini: What do you call your submission? What is the aim of your written submission?

The judge then pressed on Jagjit as to what the documents were and Jagjit again, said he could not answer.

"It is in your affidavit, you say it (the document) is my judgment. Having heard you now, I'm confused," Justice Zaini said.

The two went back and forth for a time until Justice Zaini ponders, "Are you saying these are draft judgment prepared for me?"

Jagjit says it appears to be so.

"I'm glad we can clarify that," Justice Zaini replied.

He further clarified with the counsel that his (Jagjit) argument is that the trial judge should only be furnished with submissions by the prosecution and the defence and no one else should be furnishing any opinion for the judge.

Justice Zaini: Do you see these two documents as opinion or a draft judgment?

Jagjit: To me, it doesn't seem like an opinion but it is a draft judgment written by a third party.

Justice Zaini: Are you insinuating that I would therefore use the draft judgment (in my decision)?

Jagjit: That's where the real danger of bias comes in... the perception.

Justice Zaini: I think I understand where your angle is.

11:40am: Jagjit further submits that the judge should recuse himself to protect the integrity of the court.

"Seeing this, you should say 'this is trash, take it away from me'," Jagjit adds.

11:39am: Rosmah's daughter Nooryana Najwa arrives in court and joins her brother and mother sitting on the bench at the public gallery.

11:29am: Jagjit goes into the microscopics of the document, which was blown up on a screen in the court room. He says the date of task given on the document is June 24.

"But who gave the task? Obviously it must have been given by a person of authority to someone junior," he says.

Jagjit says on the paper itself it is stated that this document has been prepared for his lordship Justice Zaini.

"Then the one that merely nails it... it says it has been prepared for his lordship on July 7. That is the date your lordship was supposed to deliver the decision in this case (before the rescheduling to Sept 1).

He also points out in the document that says, "For your lordship's consideration" and "We are of the humble opinion".

"'We' means more than one person. Who are the 'we'? Let's get them here right now!," Jagjit thunders.

11:20am: Jagjit is making his submission proper in the motion to recuse Justice Zaini. He begins by saying that trial judges must be able to discharge their duties impartially and free of outside influence. He then speaks about the "leaked" documents, which he described as "disturbing" when it appeared on social media.

"But it has come out, we cannot hide it under a coconut shell," he said.

Jagjit says the two posts on Malaysia Today are widespread on social media and have found its way on the length and breadth of the country.

"There is no argument by the prosecution to say that these are fake documents," he adds.

10:20am: Rosmah's son Norashman Najib enters the courtroom wearing a white, long sleeve shirt and sits next to his mother.

9:42am: High Court judge Justice Mohamed Zaini Mazlan says the defence has filed a certificate of urgency to the notice of motion with 15 grounds why the application needs to be heard expeditiously. He says in his court, a certificate of urgency would usually means the matter would be heard the soonest, if not the same day, it would be the next day.

Justice Zaini says that he wants the defence to submit on the application this morning. Jagjit says that he needs some time to gather his thoughts and prepare to submit.

"Impress me with your research. I will wait for you, let know when you are ready," says the judge before retreating into his chambers.

The court stands down to allow the defence to prepare.

9:34am: Senior Deputy Public Prosecutor Datuk Seri Gopal Sri Ram objects to the application to stay. He says the prosecution is ready to argue the recusal application. The "leaked judgment", which made up the subject in the notice of motion to recuse the judge, he says, is not a written judgment at all.

"The application is based on hearsay, entirely," he says, adding there is no credible and cogent evidence to back it up.

9:30am: Datuk Jagjit Singh addresses the court regarding the defence's last-minute application to recuse Justice Zaini, to stay the proceedings pending the disposal of the application and for the entire trial to be nullified. He says the prosecution has filed in an affidavit-in-reply, which the defence said it has not seen yet.

"I seek the guidance of the court for a short adjournment to allow us to ventilate this (recusal) motion," he says. 8:56am: Rosmah has arrived in the courtroom. She is wearing a soft yellow baju kurung, shawl and a matching yellow face mask. Together with her is her defence team including counsels Datuk Akberdin Abdul Kader and Datuk Jagjit Singh. Rosmah, 70, is facing a charge of soliciting RM187.5mil and two charges of accepting bribes amounting to RM6.5mil from the former managing director of Jepak Holdings Sdn Bhd, Saidi Abang Samsudin. 8:00am: A crowd of media personnel and onlookers gather outside the High Court. 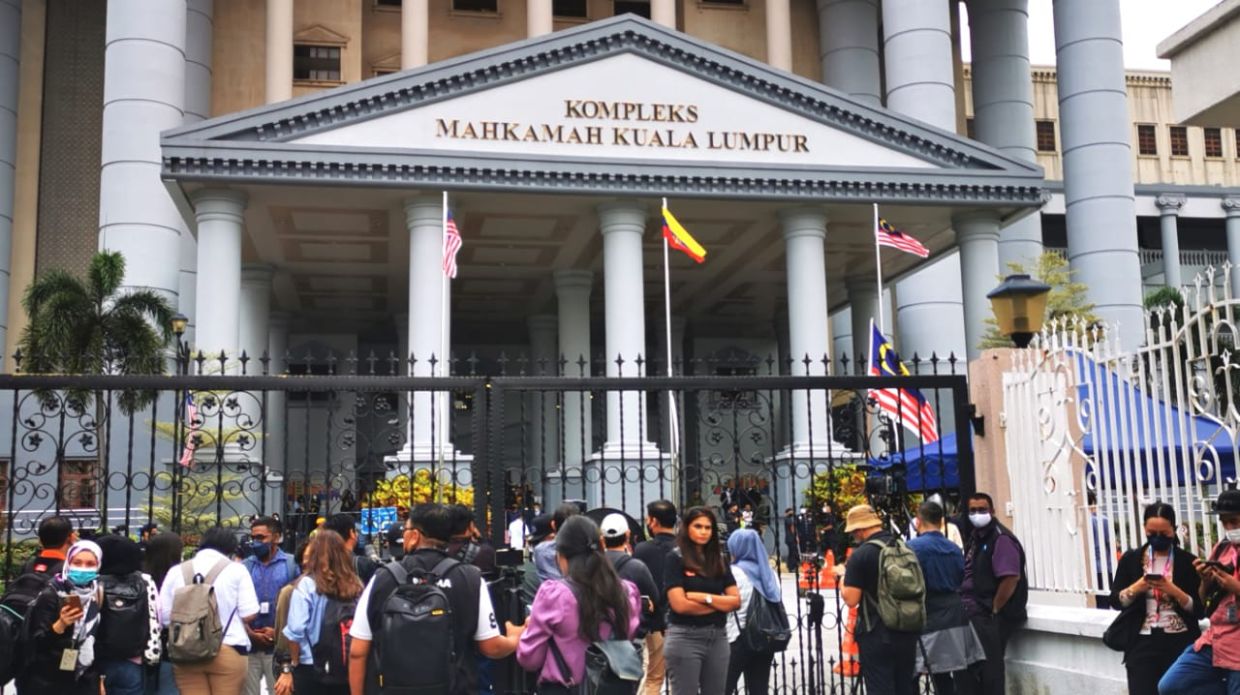 Rosmah verdict: Ex-PM's wife breaks down in court after being found guilty