The east coast Sabah politician, who is also Segama assemblyman, announced this at a press conference here on Sunday (Aug 28) about two months after quitting Parti Pribumi Bersatu Malaysia (Bersatu).

Mohamaddin joined Bersatu in November last year after leaving Parti Warisan, under which he stood for election in both seats.

He has been appointed PBM's Sabah liaison chairman and is its fourth MP, as well as its first assemblyman in the state.

His move comes ahead of the anti-hopping law expected to be implemented next month.

"I chose (PBM) after considering the party constitution. It is championing the Bornean states' rights according to the Malaysia Agreement 1963 (MA63).

"I believe the united power of people from both Sabah and Sarawak is the solution to the issue of political stability," said Mohamaddin, claiming that thousands of his supporters from Lahad Datu are ready to join him.

"Our party is (teaming) with PBM for several reasons, including to ensure greater political power at national level and because both entities are Barisan Nasional-friendly," said Kamarazaman, adding that Kuasa Rakyat agrees that Sabah and Sarawak should have more autonomy.

Sng said PBM expects more MPs to join them soon, and an announcement will be made at a press conference in Kuala Lumpur on Tuesday (Aug 30).

"At this moment PBM is planning to contest the parliamentary seats we have (in the 15th General Election), namely Ampang (held by president-designate Datuk Zuraida Kamaruddin), Tebrau (Steven Choong), Julau (Sng) and now Lahad Datu.

He added that with Kuasa Rakyat's cooperation, PBM will draw up a power-sharing formula and amend the party constitution to accord more administrative powers to Sabah and Sarawak, reflective of MA63. 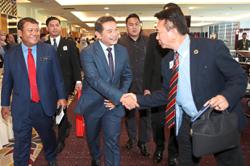