Annuar: Chicken export to be considered only if domestic supply not affected

PUTRAJAYA: The approval to export chicken will only be considered if the domestic chicken supply is not affected, so as to ensure the price of chicken can be controlled, says Tan Sri Annaur Musa (pic).

At the same time, the issue involving the provision of subsidies to chicken farmers to enable standard chicken to be sold at the retail ceiling price of RM9.40 per kilogramme in Peninsular Malaysia, also needs to be fine-tuned, said the Chairman of the Task Force on Jihad Against Inflation.

"Apart from the issue of export, we also have to deal with the issue of how long the subsidy is to be maintained.

"If we suddenly allow export and end subsidies, the price of chicken will soar again.

"We have to make sure that domestic supply is not affected at the expense of pursuing a higher profit margin, especially in Singapore which is willing to buy at a higher price," he told reporters here on Wednesday (Aug 17).

He said this when asked to comment on a statement by Deputy Minister of Domestic Trade and Consumer Affairs Datuk Rosol Wahid that the Cabinet will today finalise the decision as to whether farmers can export chicken or not.

Annuar who was also the Communications and Multimedia Minister said the Cabinet had discussed the permission to export chicken for which the Department of Veterinary Services (JPV) had submitted several recommendations.

"As of today, the Cabinet has not made any decision (permission to export chicken). The relevant ministries and departments will follow up on data preparation and so on," he said.

Annuar said that at the moment, the domestic need for chickens in the country is about 70 million birds per month or about 2.2 million chickens a day.

Although it is said that the supply currently exceeds the requirement at a level of about 3.5 million chickens, the government would only allow export if it did not affect domestic needs.

He added that the Task Force on Jihad Against Inflation had ordered the Statistics Department to conduct a study to determine the actual cost of chicken at the farm level. - Bernama 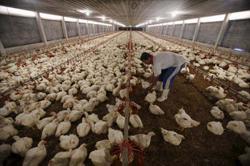