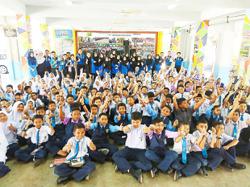 Interesting exhibit: Radzi visiting an exhibition booth at the Education Transformation Showcase at a mall in Putrajaya. — Bernama

PUTRAJAYA: A bully complaints portal will be set up by the Education Ministry by next week to improve anti-bullying efforts in schools, says Datuk Dr Radzi Jidin.

Parents and teachers can lodge reports of bullying in schools through the phone, email or portal itself, said the Education Minister, adding that these methods could deal with emergencies and the informer’s confidentiality.

He said this when asked to comment on the bullying incident at Mara Junior Science College in Kuantan after attending an education transformation showcase here yesterday.

Without commenting directly on the issue, Radzi, who is also a Senior Minister, said his ministry is committed to reducing bullying incidents in schools through several holistic measures, including establishing special committees to study existing guidelines and procedures relating to bullying in school, according to Bernama.

He also said it would launch the “Sekolahku Sejahtera, Sepakat dan Selamat” programme in partnership with the police and the Home Ministry to create a safe environment in schools.

The concept currently practised also emphasises elements of students’ character so that they can make rational decisions and the inculcation of empathy to avoid being involved in bullying, he said.

“We can monitor as much as we want but if their minds and thinking are clouded, their actions will lead to bullying,” he added.

During a get-together with students and parents at the Education Transformation Showcase earlier, Radzi said his ministry had implemented various transformations in education to create a generation of students capable of competing globally.

He said every ministry decision and policy, including the abolition of the Primary School Achievement Test and the Form Three Assessment exam, was not done hastily, adding that in general, Malaysians are too focused on examinations and do not prioritise the student’s overall development.

The three-day showcase, which began on Friday at Alamanda shopping mall here, highlights the innovations and achievements of students and teachers, digital education developments and system applications that simplify education management.