When self-gratification leads to blackmail

A MECHANIC now says he regrets “pleasuring” himself in front of an online acquaintance who threatened to circulate the video on social media, China Press reported.

The man known as Ah Keong, 30, said he could not sleep and did not dare go to work for two days after being blackmailed over the incident.It all began after he added a woman to his friends’ list on Facebook on Aug 5.

Ah Keong, from Bukit Mertajam, Penang, said this new “friend” claimed to be a 23-year-old beautician from Kuala Lumpur.

They had three video calls over WeChat. The first was a casual chat.

During the second video call, Ah Keong said the woman went topless and asked him to do likewise but he refused.

He said it was during the third video call that he fell victim to the sexual blackmail scam.

“My handphone rang and I was naked then after my shower.

“I only realised it was a video call after picking it up and the woman was also in the nude.

Ah Keong said the woman wore a face mask each time they spoke over the video call.

He said he was unsure whether the woman in the video was the same person whom he befriended on Facebook.

“I told him I am just a salaried worker. Is it possible to just ‘settle’ it with RM100?

“He refused and called me a few times after that,” said Ah Keong, who lodged a police report on Aug 9.> TVB actor Kenneth Ma was once ticked off for poor acting by veteran Benz Hui, Oriental Daily reported.

Ma, 48, said he had just graduated from TVB’s Artiste Training Class, and shared many scenes then with Hui, now aged 73.

“I remember him telling me that ‘It’s better for me to lash out at you now rather than you getting scolded by the fans when the drama series is released’,” said Ma.

Since then, Ma has gone on to scoop the Best TVB Male Artiste award for his role in Big White Duel, a critically-acclaimed medical drama, in 2019. 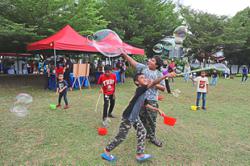