SERDANG: Agriculture industry players were told told to stop manufacturing, distributing, selling and using carbofuran and chlorpyrifos pesticides following the ban on their use in the agriculture sector effective May 1 next year.

Agriculture and Food Industry Minister Datuk Seri Dr Ronald Kiandee said the ban was to ensure the country's agricultural produce is safe and of good quality.

"This decision was taken because chlorpyrifos has the potential to cause harm to humans and the environment. It is also included in the seven highest pesticides violating the maximum residue level (MRL),” he said in his speech when launching the national-level campaign to ban carbofuran and chlorpyrifos (agricultural sector) here on Saturday (Aug 13).

The text of his speech was read out by MAFI deputy secretary-general (Policy) Azah Hanim Ahmad.

Ronald said the ban on the use of carbofuran followed its misuse on crops, resulting in vegetables and fruits to have high maximum residue level (MRL).

He said the Malaysian Pesticide Board (LRMP) also agreed that the use of chlorpyrifos should be banned in agriculture and its use limited to public health and household only.

"Many countries have taken regulatory action to ban and limit the use of chlorpyrifos. There are many alternative pesticides that are less harmful to humans and the environment to replace chlorpyrifos, such as abamectin, fipronil and lufenuron,” he said.

He said MAFI, through the Department of Agriculture, also encouraged farmers to practice Good Agricultural Practices (APP) so that quality and safe agricultural products can be produced to meet the needs of the local and export markets. - Bernama 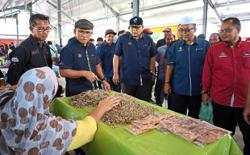