National pride: Tazar standing next to a tank he made using old tyres, recycled plastic and iron. — Bernama

IPOH: A senior citizen created various replicas from used materials and decorated them with the Jalur Gemilang to show his love for the country this Merdeka.

He placed them at his nasi lemak stall near the Muhammadiah Mosque in Tasek here.

The unique items caught the attention of passers-by, who took photos and shared them on their social media.

There were visitors who came all the way from Melaka and Penang just to see the replicas, Tazar said.

He said he felt compelled to use the discarded materials to create replicas to enliven the National Month celebration as recycling is almost forgotten these days.

“I have been doing this since 1998 because I enjoy seeing the vibrant colours of the Jalur Gemilang in each of my creations,” Tazar said.

“This year, I produced replicas of tanks, cannons and helicopters using my own money and some discarded materials such as old tyres, plastic and iron,” he told Bernama.

The father of two added that he would usually complete his creations in the first week of August.

“I took pictures and uploaded them on Facebook to create excitement for National Day. Some gave positive comments,” he added.

Tazar also encouraged the younger generations to show their patriotic spirit not only during National Month but also in their daily lives. 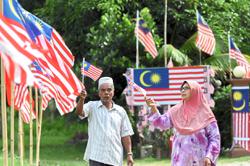