SHAH ALAM: A local man and six Myanmar nationals were detained in connection with a human trafficking syndicate.

"Initial investigations revealed that the 31-year-old local driver was transporting three men and three women from Myanmar. The three men were at the backseat of the car while the women were placed in the trunk," he said when contacted on Thursday (Aug 11).

He added that the Myanmar nationals are aged between 18 and 36 and did not have any valid identification documents.

"We discovered that the local driver was paid RM300 for each person he transported from Kota Baru to Klang. He was paid by an individual known as 'Pok Sey'. We also seized drug paraphernalia and a plastic bag filled with 50 pills believed to be 'pil Kuda'," he added.

ACP Mohd Iqbal said the police welcome any information from the public regarding this case.

"We urge those with information to contact the investigating officer Asst Supt Affendi at 016-7252948," he said. 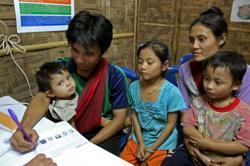