Justice Mohd Nazlan, while a High Court judge in July 2020, had sentenced the former prime minister to 12 years’ prison and a fine of RM210mil after finding him guilty of misappropriating RM42mil from SRC International Bhd.

Najib, 69, made the withdrawal in his further affidavit-in-reply filed at the Federal Court on Aug 5 via Messrs Zaid Ibrahim Suflan TH Liew & Partners.

“For the record, I categorically withdraw any interpretation of what I said which may be taken to mean that Justice Mohd Nazlan was investigated for possible bribery,” said Najib.

At another point in the affidavit, he also said, “As regards to the allegations of bribery, I again state that I withdraw them.”

However, Najib continued to insist there was additional evidence that would show serious conflict of interest by the judge and said this was why he was seeking a retrial of the entire SRC case.

Najib was responding to the prosecution’s July 21 affidavit, which had mentioned that Najib’s purported personal knowledge of Malaysian Anti-Corruption Commission investigations into Justice Mohd Nazlan cannot be true as the independent enforcement agency would not disclose confidential information relating to an ongoing investigation.

Recently, the prosecution in Najib’s SRC case claimed the allegations by Najib against the trial judge Mohd Nazlan, who is now a Court of Appeal judge, was a desperate attempt to nullify the trial.

The judge denied the accusation, describing it as a malicious intent to undermine his credibility as a Court of Appeal judge and to disrupt the justice system as well as the judicial institution.

Meanwhile, the case is at the final appeal stage in the Federal Court after the Court of Appeal upheld the verdict of the High Court and rejected Najib’s appeal. 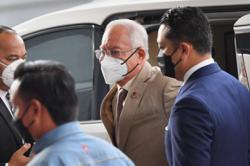