KUALA LUMPUR: The pace of the impending general election has gained momentum with Barisan Nasional scheduled to call for a supreme council meeting here on Aug 15.

While official invitations have yet to be sent out, the leaders have been told to block their calendar for the meeting, which is expected to focus on the elections.

Highly placed sources said the Barisan supreme council meeting at its headquarters at World Trade Centre Kuala Lumpur is a follow-up to the Umno supreme council on Thursday.

The officials said the main topic would be a general assessment on Barisan’s preparations for the polls and the feedback from the respective leaders.

Umno deputy president Datuk Seri Mohamad Hasan is currently on a nationwide tour, together with other Barisan leaders.

“He is expected to share with us the strengths and weaknesses of BN at the state level,” one Barisan leader added.

The official said all indications pointed to the polls to be held after Budget 2023 was tabled at the Dewan Rakyat in October.

It is understood that the many initiatives from the Budget would serve as a “feel good” factor and that Barisan wanted to capture the sentiments of the electorate.

Barisan sources described the time frame for the general election preparations as “tight” and that while the prerogative to call for the election wass entirely in the hands of Prime Minister Datuk Seri Ismail Sabri Yaakob, they were working towards the possibility of November. 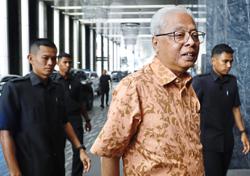