KUALA LUMPUR: Despite being unsuitable to be planted in forests, there are about 5,000 Musang King durian trees planted in a 52ha plantation on Gunung Inas, Kedah, the Dewan Rakyat was told.

Energy and Natural Resources Minister Datuk Seri Takiyuddin Hassan also said the Peninsular Malaysia Forestry Department (JPSM) had ordered an order to halt all immediate plantation of Musang King durians in 2020, when the Kedah government issued an approval in December 2019.

"In 2019, the state government had approved the cultivation of Musang King durians for more than 20% of the allowed area.

"JPSM sees this as a violation of terms, because the Musang King is not a forest plantation species and despite that, there are 5,000 trees planted in an area of 52ha in Gunung Inas," Takiyuddin said during Minister Question Time in Parliament on Tuesday (July 26) morning.

Takiyuddin said the JPSM had proposed to the Kedah government to gazette Gunung Inas as a forest reserve, so that it could act as a water catchment area.

"Whether or not the 5,000 trees planted on the 52 hectares of areas will be removed, it will depend on them (the state government)," said Takiyuddin.

Datuk Seri Abdul Azeez Abdul Rahim (BN-Baling) then interjected when he recounted the recent Baling floods earlier July, and asked whether the three water ponds near a durian plantation in Gunung Inas had caused the tragedy.

"Can we remove these three ponds? It's like a ticking time bomb and the ponds are only covered with a canvas," said Abdul Azeez.

Takiyuddin, in response, said a joint study by the ministry hasn't ascertained whether or not the ponds had caused the floods.

"Because the ponds are still intact and it hasn't broken.

"However, the ministry guarantees that if there are proposals to close the pond, immediate action will be taken. This will also depend on the cooperation of the Kedah government," added Takiyuddin.

Datuk Seri Saifuddin Nasution Ismail (PH-Kulim Bandar Baru) then asked another supplementary question, urging the ministry to come up with sterner action against the durian plantation on Gunung Inas.

"Can we do the right thing? Where the ministry issues a clear statement on the matter. I request for a stern order so this episode won't repeat itself," said Saifuddin.

In response, Takiyuddin said that forestry administrative matters fall under the purview of state governments.

"The Federal Government can only advise, give their views, but not enforcement," added Takiyuddin.

It was previously reported that local villagers had claimed that a 1,200ha durian plantation on top of Gunung Inas was behind the flood that destroyed multiple properties on July 4 when Sungai Kupang overflowed after a three-hour downpour.

The cause of the Baling floods is currently being probed in an investigation headed by the Energy and Natural Resources Ministry. 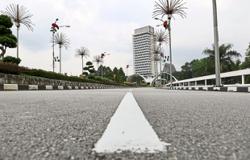