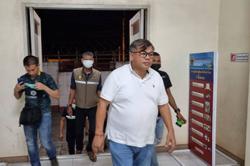 In custody: Teow being taken to a police station in Sadao district of Songkhla after he was arrested Friday morning. — Bangkok Post

BANGKOK: Fugitive Malaysian businessman Teow Wooi Huat’s visa has been revoked and he is awaiting deportation by the Thai authorities.

Sadao police superintendent Pol Col Bunthaeng Laocharoen told Bernama that 55-year-old Teow, founder of MBI Group International, had been handed over to the Immigration Police in Songkhla and would later be transferred to the Suan Plu Immigration Office in Bangkok.

Bunthaeng refuted media reports that Teow’s arrest in southern province of Songkhla on Friday was due to money-laundering charges in connection with an online gambling venture in Danok, Sadao.“Teow is on the Interpol Red Notice list and he was called in to be informed that his visa has been revoked. He will not be charged in Thailand,” he said.

Immigration Bureau deputy commissioner Pol Maj-Gen Achayon Kraithong told Bernama that Teow would be deported, but stopped short of saying to where.

“Now, it’s under consideration on immigration procedure,” he replied when asked.

On Friday, a source with the Thai police said Teow was being held at a police station in Sadao for alleged money laundering.

“Currently, the police are investigating him here in Sadao,” he said briefly when contacted by Sunday Star yesterday.

The source said he was unsure whether Teow, popularly known as Tedy, would be extradited to Malaysia.

He was arrested in a raid conducted by a team led by Thai national police assistant chief Pol Lt-Gen Surachate Hakparn, which led to the police searching Teow’s MBI Group’s office in Sadao at the Thai-Malaysian border.

It was reported that his capture came following a crackdown on online gambling in southern Thailand that saw local politicians in Songkhla and Nakhon Si Thammarat provinces arrested for their alleged involvement in gambling syndicates.

An investigation led by Surachate discovered their links to Teow, police said on Friday.

MBI Group’s office in Thailand is located on a plot of land spanning over 100 rai (16ha).

It is involved in a wide variety of businesses worth over 10 billion baht (RM1.22bil), ranging from hotels, entertainment places and amusement parks to real estate.

Teow was arrested in 2017 in Malaysia on a charge of drug dealing, but he fled to Songkhla and later managed to escape prosecution.

Perlis police chief Deputy Comm Datuk Surina Saad said her counterpart in Thailand would inform the state police if any extradition was to be conducted.

“So far, no news about that yet. We have yet to receive any instruction on the extradition,” she said yesterday.

In 2018, Malaysian authorities charged Teow with financial crime and his assets were seized for his alleged connection to a pyramid scheme, but he fled to Thailand last year.

MBI Group International made headlines in Malaysia in October 2019 when scores of Chinese nationals rallied outside the embassy in Kuala Lumpur, claiming they had lost their life savings to the firm.

They said they had been “cheated” by an online pyramid scheme allegedly run by MBI Group International.

Teow is also wanted in connection with a US$83mil (RM336mil) money-laundering scam in Macau. 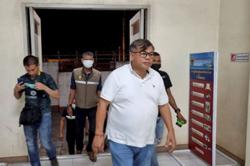