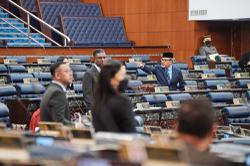 KUALA LUMPUR: A shouting match broke out in the Dewan Rakyat while the Anti-Sexual Harassment Bill was being debated after Datuk Tajuddin Abdul Rahman (BN-Pasir Salak) went on a tirade against Opposition lawmakers, even going on to call several women MPs indecent.

Tajuddin said the Opposition MPs wanted to damage his reputation along with two other MPs.

“So-called disrespectful to women. They don’t know the three of us. You don’t know how we treat women,” he said.

“You want to spoil our image. We have won the election most of the time, most wanita (women) support us,” he added.

Tajuddin was calling them out for labelling him as one of the MPs who was prone to make sexist remarks. He was referring to Teo Nie Ching (PH-Kulai)'s statement during her debate on Tuesday (July 19), naming Tajuddin and two other MPs as being prone to such behaviours.

“Some of you have bad mouth. I don’t want to take names. They (like to) stoke flames, instigate and challenge me and the Speaker,” he said.

RSN Rayer (PH-Jelutong) asked Deputy Speaker Datuk Rashid Hasnon whether he would continue to allow Tajuddin to go on with his behaviour.

“Are you not brave enough to send him out?” he asked.

Even after the microphone was turned off, Tajuddin was heard shouting.

Several Opposition MPs said his actions were inappropriate and disrespectful as the Anti-Sexual Harassment Bill was being debated.

“He just cussed in this House. He used bad words in the house. He insulted women MPs. You let Pasir Salak walk away,” she said.

Steven Sim (PH-Bukit Mertajam) asked Tajuddin to apologise and retract his remarks, adding that his behaviour runs against the spirit of the Bill at hand.

Kasthuri said the warning given by Rashid was pointless for lawmakers such as Tajuddin.

“Let’s clear the air here Speaker. You gave a warning. He didn’t heed it. Like Bukit Mertajam (Steven Sim) said, he should apologise and retract what he said.

"You allowed him to continue to monopolise the House, to control the house. He went on and on wasting the time of the House and you did not act on it,” she said while adding there was no point of having rules if action cannot be taken.

Kasthuri said such lawmakers have always been let off the hook.

“We have to suffer here in this House. It is not about immunity, it is about decorum and language. The warning didn’t work,” she added.

Hannah Yeoh (PH-Segambut) said it was pointless to talk about indecent language outside when the same was being done in the House.

“I heard Pasir Salak using the p-word which is indecent but no action was taken,” she said.

She questioned Rashid’s doubled standard when he was quick to act against Isnaraissah Munirah Majilis (Warisan-Kota Belud) by issuing her a two-day suspension when she pressed for the matter of the Sulu Sultanate claim to be discussed on Monday (July 18).

Wong Shu Qi (PH-Kluang) said it would be a “black history” for the August House if action was not taken.

Rashid said the MPs could submit a written motion if they were not happy with his ruling, adding that he was concentrating on the proceeding on the floor.

Rayer said Rashid should not compare the matter with Isnaraissah as she was trying to put forth a matter which involved national security.

“Today, Pasir Salak made indecent and sexist remarks which was uncalled for. He was provocative and repeated it a few times. However, I am sorry Speaker, you were not brave enough to eject him,” he said while demanding the explanation on the double standards. 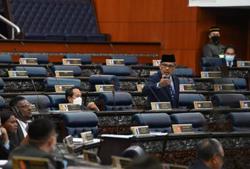 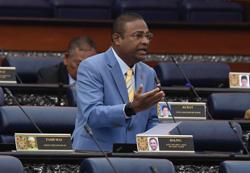