KUALA LUMPUR: Bukit Aman has rubbished claims that the police and Road Transport Department are offering a 50% discount on traffic compounds.

"The advertisement also shows the compound rates and discounts and claims that the offer is valid until July 20. It also urges those interested to contact an individual via a phone number on the advertisement," she said in a statement on Sunday (July 17).

She said the advertisement is fake, adding that investigations are ongoing to trace the individual responsible for spreading the fake advertisement.

"We urge the public who receive the advertisement to not be influenced by it and attempt to contact the individual involved.

"The public is urged to check first the authenticity of any news or message over traffic compound discount offers on the police official channels," she said. 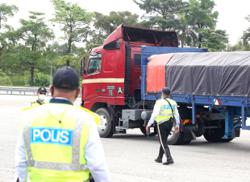