BALING: The Women, Family and Community Development Ministry (KPWKM) has provided a local social support centre with counsellors to provide moral and emotional support to flood victims in the district.

Its Minister Datuk Seri Rina Mohd Harun (pic) said the victims needed psychosocial guidance in dealing with the tragedy, as it was found that some of them were traumatised by the incident.

"We know that some of them are traumatised. I was also visited by some representatives from nearby residential areas although not affected, they also felt traumatised as they are constantly worried if their houses are safe or otherwise.

"Hence, we need to give psychosocial help to them,” she told Bernama after a briefing session from the Social Welfare Department (JKM). She also presented donations to the flood victims at the temporary evacuation centre (PPS) Surau An-Nur near here on Saturday (July 9).

Rina said women traders who were affected by the floods will be assisted in terms of basic capital to restart their businesses.

On the donation, she said it was in the form of food baskets as well as electrical appliances such as rice cookers and fans which were also donated by corporate companies as well as her ministry.

Floods and water surge phenomenon on Monday claimed three lives, including a pregnant woman. A total of 12 villages were affected with 15 houses badly damaged that they could no longer be inhabited. - Bernama 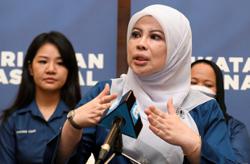