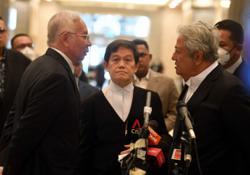 "I think in the interest of justice, I would accede to the request for a site visit, but we can fix that for another time. We can arrange the dates later,” said the judge in response to an invitation by defence lawyer Hisyam Teh Poh Teik since the two properties were the subject matter of one of the 27 money laundering charges against Ahmad Zahid.

According to Hisyam, the visit would give a clear picture as regards to the current status of the bungalows, their location and the distance of both bungalow lots to the Surau An-Nur.

However, deputy public prosecutor Datuk Raja Rozela Raja Toran said the site visit was unnecessary, as photos of the two properties could be produced in court.

"For us to actually take the trip, it's not really about what renovation, there was a purchase, I think I would decline the invitation to visit the bungalow lots. It's not necessary, if Your Lordship is inclined to go visiting, perhaps we can take another day, not this time, would not clash (trial date),” she said.

The Bagan Datuk MP said this when questioned by deputy public prosecutor Harris Ong Mohd Jeffery Ong on the distance between the two bungalows and his residence.

He also told the court that he was the chairman of Surau An-Nur and that there was another surau in the area and also in his house where he could pray.

On the purchase of the two bungalows worth RM5.9mil, Ahmad Zahid said he could not ascertain who prepared the cheque and that the purchase was handled by lawyer B. Muralidharan of Messrs Lewis & Co.

He also told the court that there was no official letter in the appointment of Messrs. Lewis & Co as the trustee of the Yayasan Akalbudi fund.

"The appointment (of Lewis & Co) was made when I lost faith in (my former executive secretary) Major Mazlina Mazlan @ Ramly because she was careless and made repeated mistakes in handling the Yayasan Akalbudi account," he said in his defence proceedings on 47 charges involving breach of trust, corruption and money laundering.

To a question by Harris Ong that on the need for a letter of appointment to prevent a similar incident, Ahmad Zahid said it was not important and that Murakidharan nor the legal firm had requested for the letter.

Ahmad Zahid: There is no official letter. I have known Muralidharan for a long time and had sought the advice of friends as well as former lawyers. So far, there is no negligence committed by the firm in handling Yayasan Akalbudi funds.