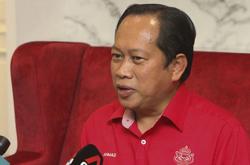 KUALA LUMPUR: Despite calls by some for the 15th General Election to be held as soon as possible this year, DAP secretary-general Anthony Loke believes it will only happen next year, possibly even after Hari Raya Aidilfitri.

Loke explained this was because the window for the government to dissolve Parliament is quite narrow, despite mounting speculation that GE15 will be called by September this year.

"Even though there is much speculation that GE15 may happen in August or September, I don't think they want to take the risk of facing elections in the midst of a surging inflation," he told senior editors during the Concorde Club forum here on Tuesday (July 5).

Loke also noted that October, November and December is the annual monsoon season.

"Potentially, floods will be happening at the end of the year. So, I don't think that window is suitable." added Loke.

Loke then said Hari Raya Aidilfitri will be in April next year and Chinese New Year is in January.

"No elections are held in the middle of festive seasons. Never before in our history.

"The window could be next year after Hari Raya. That is my take," said Loke.

Meanwhile, Loke said he hoped PKR would decide if they will use Pakatan Harapan's choice of logo for GE15 by August this year.

The Seremban MP noted that DAP used the Pakatan logo in the previous Melaka and Johor state elections.

"It is our hope that all coalition members adopt a common logo," added Loke.

Loke noted there were delays from PKR as the party was going through its polls, with official results to be unveiled during its three-day party congress from July 15 to 17.

"Now that the PKR elections have concluded, we hope that immediately after its congress, we can meet, discuss and take a common position on it (logo).

"I think this position is quite crucial for us to prepare for the general election. Without a decision, many things cannot be done, such as physical preparations including the printing of flags, merchandise and T-shirts," said Loke.

"We hope a decision will be made as early as August. So we have ample time to prepare," added Loke,noting that electoral preparations by Pakatan have always taken place a year before national polls.

The present Parliament term will expire in July next year.

Loke was speaking as a guest of the Concorde Club, an informal group of media editors and journalists.

The club meets monthly with politicians and key policy makers. 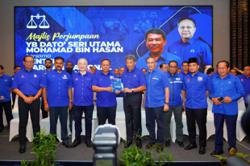