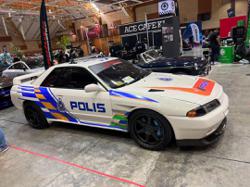 SEPANG: Police have seized a Nissan Skyline and arrested its owner for installing police livery and decals on the vehicle.

The supercar was one of the vehicles on display at an autoshow at the Malaysia Agro Exposition Park Serdang (MAEPS) during the weekend.

"I can confirm that an investigation is under way after a police report was lodged on the vehicle which looked like a police car. The vehicle is owned by a 45-year-old car accessory shop operator,” he said.

"We have seized the Nissan Skyline R32 car which had the police emblems and livery on it," added ACP Wan Kamarul in a statement on Sunday (July 3).

"We have opened investigations under Section 89 of the Police Act for owning items which are supplied to the police in dispensing their duties. Investigations are ongoing," he said, adding that the vehicle owner was released on bail after his statement was recorded by police.

Pictures and videos of the vehicle have gone viral on social media after the vehicle was put on display at the Art Of Speed Malaysia autoshow.