KUALA LUMPUR: A one-year child and her six-year-old sister were abandoned at a squatter settlement here as their parents fled during an early morning raid on illegal immigrants by the Immigration Department.

The parents, believed to be Indonesians, had left the children behind during the 1.30am raid in Kampung Masjid, Segambut Dalam, yesterday.

Most of the undocumented foreigners are believed to have run into the secondary forest nearby.

“They even abandoned their children to escape. We will place officers at the house until the parents return,” said Kuala Lumpur Immigration department director Shamsul Badrin Mohshin.

The raid came just over an hour after the expiry of the recalibration programme for undocumented immigrants.

Shamsul Badrin said his officers checked 92 Indonesians and Bangladeshis at the village.

“We found that 76 of them – 46 men, 23 women and seven children – had committed offences such as not possessing valid travel documents and overstaying,” he told reporters after the raid.

The department will continue to raid areas known to house undocumented foreigners, like factories and commercial centres in the city, he said.

“We will not compromise in taking action in accordance with the Immigration Act.

“The Home Ministry has told them (undocumented foreigners) since November 2020 to take part in the repatriation programme but some are still stubborn,” he said. 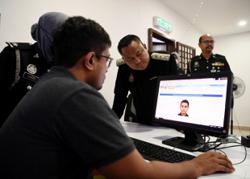