KOTA KINABALU: For the last 22 years, Chris Chu has been diligently selling newspapers and magazines without much fanfare from his small shop in Foh Sang here.

But work on Thursday (June 30) had a unique and different meaning as he was about to meet a very special person.

“I have been sharing about Sabah-born Australian Foreign Minister Penny Wong to my family members and my daughter made a painting of her,” he said.

Chu, 55, said his daughter Tania was so inspired by Penny’s life story and achievements that the nine-year-old quickly sketched a portrait of the Australian politician the night before.

“We only knew she was coming in on Tuesday (June 28) night and we have never met Penny but she is my daughter’s hero. It is very outstanding for a Sabah-born person to be a senator in the Australian parliament.

“It’s very special as she could even helm a higher position (one day). Everything is possible,” he said, after presenting the drawing to Wong during her visit to Foh Sang.

Chu pointed out that Tania, the youngest of four siblings, did not want to be a politician like Wong but a scientist.

“And she’s hoping, through her painting, Penny can one day help set up an Australian university in Sabah so she can realise her dreams when she is ready to enrol in seven or eight years’ time. Penny being greeted by a lion dance troupe on her arrival in Foh Sang.

“I told Penny the meaning of the painting and how quickly my daughter did it and the minister gave an indication she will look into (the suggestion).

“Penny appreciated the drawing and wrote a thank-you note for my daughter,” Chu said.

Wong was on a walkabout with several local politicians as she took a stroll down memory lane in Foh Sang as part of her homecoming visit to the state capital.

“It’s pretty interesting walking around here. The last time I came here was when dad and I were doing some grocery shopping,” she said, referring to her father Datuk Francis Chong, a retired prominent local architect now residing in Australia.

“But this time it’s a little bit different – I don’t think anyone noticed me then,” she added with a laugh.

Wong, who was welcomed by a lion dance troupe on her arrival, took time to greet shopkeepers and eatery owners during her visit at 10.45am, going around the once-familiar row of shops in Foh Sang, dubbed the Chinatown of Kota Kinabalu.

Earlier, she had a breakfast of congee with her brother James Wong before visiting her paternal grandmother’s grave at the Buddhist cemetery in Mile 5, Tuaran Road near here, where they offered prayers and laid wreaths.

After that, she spent some time at the Kinabalu International School where she spoke to students and teachers.

Wong said she was touched by the warm welcome and hospitality shown to her delegates and to her.

“It’s been a really wonderful thing to come back to KK. And as I said last night, I hope my personal story can contribute to the relationship.

“But more importantly, what I want to emphasise is that this is not only my story – this is a story many Australians can tell.

“We have so many Australians who were born overseas or their parents were, who have connections with South-East Asia or other countries around the world.

“I hope in part, my story can (help remind) people in this region and throughout the world that Australia is a modern, diverse and multicultural society which is keen to continue engaging with the region,” Wong sai 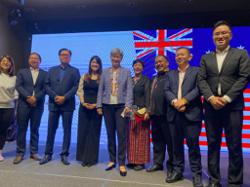