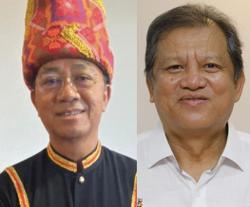 The party secretary-general said that the 64 candidates contesting for various posts such as the deputy presidency down to seats in the supreme council was a reflection that the interest among members to contribute to the party’s growth has not waned.

“This is a very good development because this is a record for us in terms of the high number of candidates competing,” he said during the party’s Malam Bersatu dinner event at Hakka Hall here on Wednesday (June 29).

“As touched by our president Datuk Seri Dr Maximus Ongkili previously, this means more members want to offer themselves to shoulder the responsibility of bringing PBS to greater heights,” he added.

He said that with more than 1,400 people comprising delegates and observers attending the dinner, it was also a momentous occasion as they never had so many attendees for the event which is customarily held with every delegates conference.

The 36th and 37th annual PBS delegates conferences are currently being held back-to-back from June 28 to July 1, with the party elections being on Thursday (June 30).

Bangkuai is among those contesting, with the 60-year-old Kiulu assemblyman contesting the deputy president’s post for the non-Muslim bumiputra quota in a straight fight against vice-president Datuk Dr Joachim Gunsalam.

Incumbent Datuk Seri Radin Malleh has opted not to defend the position.

The non-Muslim Bumiputra deputy president is widely seen as the most likely successor to the president of the multi-racial party which draws its strength from the native Kadazan Dusun Murut Rungus (KDMR) community.

Ongkili as well as Datuk Jahid Jahim will retain their positions as the president and deputy president for the Muslim Bumiputra quota respectively unopposed.

Meanwhile, Bangkuai said the dinner was also a memorable moment as they launched their MyPBS app as well as a book documenting the struggles of Sabah’s oldest party.

He said the book was important, particularly for the younger voters, to learn of PBS’s history and what it had fought for since its inception 37 years ago.

“For example, the book showcases PBS’ struggles on state rights, oil royalty, the migrant issue and the anti-hopping law, issues which we are still fighting for today.

“We want the younger generation to know that we were the pioneers for these issues,” he said.

PBS information chief Datuk Julita Majungki said the MyPBS app would allow members and the public to easily access information and the latest news about the party.

She said the people could also sign up as members through the app’s online member registration feature.