Hot from the wok: Chang and his son Ghee Kwong frying up pisang goreng in coconut oil at their stall in George Town. — LIM BENG TATT/The Star

GEORGE TOWN: Hypermarkets are seeing better sales for cooking oil just days before the subsidy for the bottled version is removed.

“I only buy the packeted oil as we cannot afford the bottled cooking oil, with its prices expected to go up when the subsidy is removed.

“I foresee many people would have stocked up by now.

“Some would opt for the subsidised packeted oil, especially those living on a shoestring budget,” she said at a hypermarket here.

Zubaidah said she would return over the next two days as the hypermarket only allows each family to buy two packets on each visit.

“I need cooking oil as there are six of us at home who need to eat.

“I was worried today that I might have to resort to buying a bottle as I heard people were rushing to stock up on cooking oil in various packaging,” she added.

“We are here to pick up 1kg oil packets as this is subsidised and the cheapest.

“If there is no stock, then we have to buy the bottled oil.

“But the money for bottled oil could actually go towards baby formula,” he said at a popular supermarket in Bayan Baru.

Meanwhile, Chang Khye Chiew, 68, who has been selling pisang goreng and other local fried delights for over 40 years, said he is unfazed by the removal of the subsidy for bottled cooking oil.

He said he had been using coconut oil to make his delights crispy and taste better.

Sunshine Wholesale Mart marketing and communication manager Bryan Wong said oil packets were available for sale but each family is limited to two packets per visit.

“It always sells out so we have to make sure we have enough stock,” he added.

M40 families caught in the middle

Many eat at home to beat rising prices 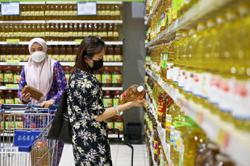