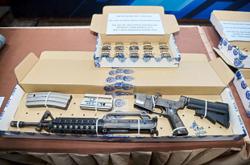 KUALA LUMPUR: The younger brother of an alleged gang leader who was killed in a shootout recently has led police to the discovery of an assault rifle.

The M4 assault rifle and 69 rounds of 5.56mm ammunition were hidden in a chicken coop not far from where police arrested the 35-year-old suspect at Tanjung Sepat, Kuala Langat on Sunday (June 26).

"About two hours later, the suspect led us to a chicken coop where a dismantled M4 assault rifle and 69 rounds of 5.56mm ammunition were hidden.

"They were hidden in PVC pipes," he told reporters on Tuesday (June 28).

He said with the latest arrest, police have crippled the gang after arresting nine men and a woman in total.

"We believe the group has secret society links.

"We (are also not ruling out) the possibility that this group was involved in the grenade explosion in front of a nightclub in Jalan Bukit Bintang here in October 2014," he said.

On Oct 9, 2014, 12 people were injured after a grenade exploded in front of the Sun Complex here.

Car jockey Tiong Kwang Yie, 36, passed away after being treated in the intensive care unit at a hospital here following the 4.25am blast.

A gangland feud was believed to be the reason for the attack. 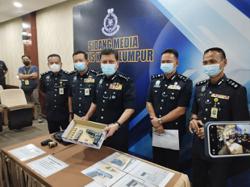 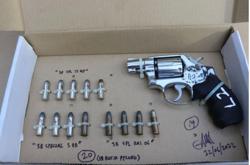