The Housing and Local Government Minister said the ministry had developed the roadmap where 155 local authorities would prepare their SDG blueprint and subsequently a Voluntary Local Review (VLR) by 2030.

"We would like UN-Habitat to recognise our national programme and subsequently provide accreditation to our cities, under the UN-Habitat SDG Cities flagship programme.

"To date, Kuala Lumpur, Subang Jaya and Shah Alam have submitted their VLR report, while four more are in progress - Alor Gajah, Sepang, Selayang and Melaka City,” he said in a statement after meeting with UN-Habitat executive director Datuk Seri Maimunah Mohd Sharif.

WUF11, with the theme "Transforming Our Cities, For A Better Urban Future", is being held over five days beginning Sunday (June 26).

Meanwhile, Reezal Merican said Malaysia would like to work together with UN-Habitat to improve the local technical capacity in Malaysia to accelerate the country’s implementation of the smart city initiative.

"We support the UN-Habitat Smart City initiative that focuses on the people-centred smart city,” he said.

On coastal resilience, he said Malaysia was glad to share the National Coastal Zone Physical Plan framework that was launched recently.

"Malaysia is among the few countries that have come out with this strategic blueprint to protect and manage our coastal area.

"We will be glad to share the methodology and framework of the study with other countries,” he said.

Organised and convened by UN-Habitat, WUF is one of the most inclusive international gatherings on urban issues, bringing together representatives of national, regional and local governments, academics, business people, community leaders, urban planners and civil society representatives. - Bernama 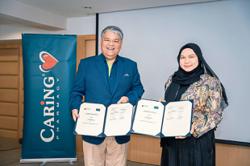