KUALA NERANG: A proposal for ministers to take a pay and allowance cut is not the solution that will help the people deal with the rising cost of living now, said Rural Development Minister Datuk Seri Mahdzir Khalid (pic).

Instead, he said the situation should be addressed with more effective methods including those announced by Prime Minister Datuk Seri Ismail Sabri Yaakob regarding electricity tariffs and chicken prices.

"The Prime Minister and his team in the Cabinet have put in a lot of effort, especially ministers who are directly involved with the economy and the prices of goods like the Finance Ministry and those related to the economy, commerce, agriculture and public works.

"They meet twice weekly to discuss ways and find solutions like the one the Prime Minister announced yesterday (June 24) on the no increase in electricity tariffs and the decision not to float the market price of chicken,” he said to reporters after officiating the Sekolah Kebangsaan Tualak Parents and Teachers Association here on Saturday (June 25).

He was asked to comment on a suggestion by former International Trade and Industry minister, Tan Sri Rafidah Aziz who proposed a cut in the minister's salary to show empathy for the people who are now struggling with the economic crisis because of Covid-19 and the Russia-Ukraine conflict.

He also said maintaining the price of RON95 petrol at RM2.05 per litre is also one of the measures to help the people cope with the rising cost of living.

He encouraged those with ideas that can help the people deal with the issue to forward them to the government and the Prime Minister.

"We don't know what Rafidah meant about the salary cut, whether she really meant it or was just being sarcastic,” he said, adding that as a senior she should be giving a much better idea.

"She is a veteran, a person who should give good advice on what can be done. If she has an idea, she should meet the Prime Minister and tell him her ideas," he added. - Bernama 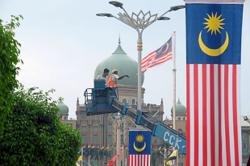