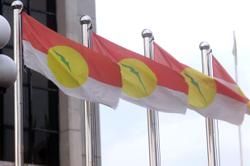 KUALA LUMPUR: Umno is ramping up preparations for early polls and mobilising its election machinery nationwide.

This was decided by the party's supreme council so its members will be ready to face the 15th General Election.

"It was decided during the meeting that Umno's election machinery will be mobilised at all levels together with other Barisan Nasional component parties.

"This is to ensure that the Barisan election machinery is at its highest level of readiness," said Umno secretary-general Datuk Seri Ahmad Maslan after the party's supreme council meeting on Friday (June 24) night.

Asked when the general election is likely to be held, Ahmad said this was for the prime minister to decide.

He also said that the supreme council wanted the anti-party hopping and political funding laws to be in place before this happens.

Umno has been pushing for GE15 to be held early over the past two years.

However, the party agreed to back off on its demand for snap polls following the signing of the memorandum of understanding (MOU) between the Government and the Opposition last September to ensure political stability and reforms for the nation.

Although no expiry date was set for the MOU, it spelt out that July 31 as the deadline for the Government to carry out reforms, such as tabling the anti party-hopping law in the Dewan Rakyat.

Calls for early elections by Umno, the backbone of the Barisan coalition, surfaced again recently following back-to-back wins in the Melaka and Johor state polls.

The current term of the 14th Parliament ends in mid July 2023, and a general election must be held within 60 days of the dissolution of Parliament.

He said that party president Datuk Seri Dr Ahmad Zahid Hamidi has the prerogative to appoint 13 members to the supreme council.

He said that Isham's appointment was done to fill a vacancy after Datuk Seri Tajuddin Abdul Rahman was removed from the supreme council.

Tajuddin will be the next Malaysian ambassador to Indonesia.