KUALA LUMPUR: Australia's Foreign Affairs Minister Penny Wong will visit Malaysia on Tuesday (June 28) to deepen ties and to build on the existing partnerships for the benefit of the countries and the region.

"I will reaffirm our commitment as Comprehensive Strategic Partners and discuss economic recovery, climate action, education ties and health security," she said in a statement posted on the official website of Australia's foreign minister which was made available to Bernama.

The 54-year-old said she will also travel to Sabah, a region where she hails from, adding that it is a region that has longstanding ties to Australia.

"It is the region where I am from. Having spent my early years in Kota Kinabalu, I look forward to the great honour of returning to the city as Australia's Foreign Minister," said the graduate with a law and arts degree from the University of Adelaide in 1992.

Prior to visiting Malaysia, Wong will depart to Vietnam on Sunday (June 26), where she will be meeting President Nguyen Xuan Phuc, Prime Minister Pham Minh Chinh and Foreign Minister Bùi Thanh Sơn.

"The visit, taking place ahead of next year's 50th anniversary of diplomatic relations (between Australia and Vietnam), will focus on climate change cooperation, shared trade and investment ambitions and Australia's continued support for Vietnam's Covid-19 recovery," Wong said.

She said the visit to both countries will be her second trip to South-East Asia since becoming Foreign Minister one month ago, stressing that Australia's future is tied to the future of South-East Asia.

"It's more than geography that binds us - we have genuine links in Vietnam and Malaysia - family, business, education and tourism.

"My visit seeks to deepen these ties, building on our existing partnerships for the benefit of our countries and the region," she added.

Wong was elected as a senator for South Australia in 2001, and went on to defend her seat in 2007, 2013 and 2016. This makes Wong the fourth longest serving senator in Australia. 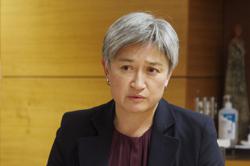