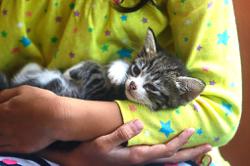 PETALING JAYA: Videos of cats being crushed between automatic gates and doors have been circulating on social media.

Drawing attention to such incidents, independent animal rescuer Lina Yakob, 36, said pet owners should check if the animal is near the gate while it is being closed.

“It is quite heart-wrenching (to see such cases),” she said.

“If you live in a landed property, cats are everywhere regardless of whether you own one or not, so one must check while the gate is closing,” she added.

She said instead of recording such incidents, onlookers should try to open the gates to free these trapped animals.

Likewise, Joanne Low of Homeless Paws of Manjung Strays advised dog owners to barricade their pets in a safe area within porches so that they are not exposed to the dangers of auto gates.

“Owners should be observant when closing their auto gates before leaving the house to make sure everything is fine,” she said.

Cats, she added, can be kept in large cages before the owners leave the house.

Independent Pet Adoption Network co-founder Sherrina Krishnan-Leyow said the mishaps involving pets and auto gates usually happen when pets are not fast enough to get out of the way when gates are closing, therefore, crushing them.

“And it’s too late to save them. Owners are sometimes forgetful and in a rush to close the gate. They forget to check on the safety of the pet.

“I guess this can happen to children, too,” she said.

She said owners too must decide whether “convenience or safety of their cats or dogs” is more important.

“Why not opt for the standard gate, which is not automated.

“This way, when they go to open and close the gate, they are assured the pet cat or dog is not anywhere near the opening or closing of the gate,” she said.

“Cats, regardless of how intelligent they are, can get crushed or lightly injured. Sometimes, these accidents can be fatal,” she added.

She said there have also been issues with malfunctioning auto gates leading to pets getting out of homes and foraying into unfamiliar territory.

“Two dogs recently escaped. Three days later, we found one of them hiding in the drain, about one to two km away from their home.

“We eventually found the other the next day. Unfortunately, he didn’t make it. He was knocked down. This is sad and heart-breaking. Owners don’t do this intentionally, but maybe they should consider pet safety over convenience (of an automatic gate),” she added. 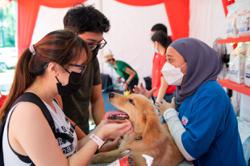