The Prime Minister also announced that the temporary subsidy programme for 1kg, 2kg, 3kg and 5kg bottled cooking oil, which was introduced during the Covid-19 pandemic, will be discontinued from July 1.

He also clarified that the subsidy for cooking oil in 1kg packets was still in effect, and that this was first announced in 2007.

In a special announcement Wednesday (June 22), Ismail Sabri added that the temporary subsidy started in August 2021 and was aimed at assisting the rakyat facing difficulties during the pandemic.

“The government has decided not to extend the subsidy for bottled cooking oil, as it does not meet the initial goal of the initiative, which was to help those affected by the pandemic.

“However, the government found that the assistance provided was misused by certain people including the commercial sector, industries and due to smuggling,” he said.

Ismail Sabri added that the temporary cooking oil subsidy cost the government RM55mil per month and was initially slated for only three months from August 2021.

He also said that existing subsidies for cooking oil in packets would continue.

“There were rumours saying that the subsidy for cooking oil in packets was removed, it was not and it is still available,” he said.

During the announcement, additional cash assistance to the B40 group was also announced by Ismail Sabri under the Bantuan Keluarga Malaysia.

He added that the payment will be made in four stages, starting from June 27 and will benefit over 8.6 million people.

“The BKM Phase 2 payment involves an allocation of RM1.11 billion, where each BKM recipient receives up to RM400 according to their respective qualification categories.

“Each BKM recipient will receive up to RM500 according to their respective BKM qualification categories.

The decision to provide the financial assistance was after the government had taken into consideration rising living costs and food prices, the Prime Minister said.

He added that the additional cash payments involve an extra allocation of RM630mil, making the total allocation of BKM to RM1.74bil.

BKM recipients to get up to RM2,500 in cash aid this year, says PM 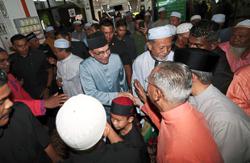