Ismail Sabri said after the virtual meeting that it touched on the direction of flood mitigation efforts and the measures to increase the country’s resilience and preparation to face the impact of climate change.

“This is because the high humidity levels and the (surface conditions) of the Earth have led to this phenomenon (climate change),” he said in a statement.

The measures include the development of the National Adaptation Plan (MyNAP) which includes action steps, long-term strategies and national development strategies for public health, infrastructure, safety and water sources, agriculture as well as forestry and biodiversity, he added.

Ismail Sabri also encouraged state governments to use the Climate Change Adaptation Index to increase responses to the impact of climate change.

Apart from that, climate change considerations would also be factored into the planning, design and development of water and infrastructure projects to reduce the risk of floods.

Tuesday's MyCAC meeting, its third, was attended by mentris besar, chief ministers, Cabinet ministers, the Chief Secretary to the government, as well as climate change experts.

On a related matter, Ismail Sabri said a proposal to use electric vehicles (EV) in big events was also discussed.

Environment and Water Minister Datuk Seri Tuan Ibrahim Tuan Man had said last year that domestic carbon trading will be implemented in three phases at the end of this year.

“This initiative is expected to drive the EV ecosystem in this country besides effectively reducing greenhouse gas (GHG) emissions,” Ismail Sabri said.

“This also has the potential to attract foreign investments to create job opportunities in the green (sector) and to ensure fuel subsidy savings by the government,” he added.

Aside from that, the meeting also agreed with the Environment and Water Ministry’s framework for a carbon market policy which will also serve as a basic guide for carbon credit transactions in the country.

“The framework will emphasise the importance of carbon credit transactions domestically to ensure that the carbon market mechanism is executed transparently; is in compliance with international standards; and contributes towards the target of reducing GHG emission,” he added.

Ismail Sabri will be leading the Malaysian delegation to the United Nations Climate Change Conference in Egypt from Nov 6 to 18.

He said the Federal Government, state governments and other stakeholders will continue to collaborate to ensure that the country is well positioned to overcome climate change issues for the well-being of Keluarga Malaysia. 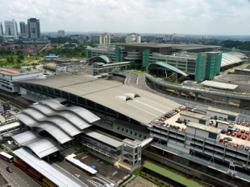