He said there will be 31 trips daily, of which 18 trips are from Johor Baru Sentral to Woodlands, while the remaining 13 are from Woodlands to Johor Baru.

“We expect the service will be able to ferry around 7,000 passengers daily, but for the first week, each trip will be limited to 240 people and will return to its full capacity of 320 passengers per trip next week," he said,

“The train frequency is one trip every 30 minutes for RM5 per person for a one-way trip from Johor, and S$5 from the Singapore side,” he said when met by reporters after the flag-off ceremony of the Tebrau shuttle at JB Sentral here.

The service was previously suspended on March 24, 2020 due to the Covid-19 pandemic.

Dr Wee explained that the limitation was due to giving KTMB a chance to match the service between MySejahtera and MyICA applications.

We have made improvements such as requiring passengers to use their passports as their boarding tickets and limiting each passenger to a maximum of four tickets.

“One of the issues that KTMB faced before were train ticket touts, where they would buy tickets in bulk and resell them at a higher price,” he said.

Dr Wee added that KTMB had also conducted a dry run on June 14 to ensure that the train service was safe.

Meanwhile, Onn Hafiz said that he hopes that the resumption of the train service will help reduce the traffic congestion at the Johor Causeway.

“I was informed that more than 70,000 tickets have been sold for the first month of the Tebrau shuttle service. This clearly shows that people really look forward to using this service again," said Onn Hafiz.

He added that this is a historic moment, as the service was suspended two years ago.

“We hope that this will contribute to reducing the traffic congestion,” he said, adding that he has similar hopes for the ongoing Johor Baru-Singapore Rapid Transit System Link (RTS Link) project at Bukit Chagar. 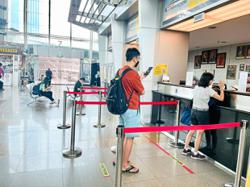