Talks to begin soon on HSR link with Thailand “There is much for the region to gain by eventually expanding on this HSR connectivity to Bangkok,” he said as he briefed a European Union-Asean Business Council (EU-ABC) delegation here yesterday.

The delegation, led by its chairman Donald Kanak and vice-chairman Tassilo Brinzer, had paid a courtesy call on the Transport Minister’s office.

“I took some time to elaborate on some of the ministry’s priorities and policies with regard to ehailing, p-hailing and the 2020 amendments to the Road Transport Act 1987,” said Dr Wee in a Facebook post.

In it, he said the delegation was heartened by the government’s direction on the broad issue of road safety, as reflected by its stricter stance against reckless driving and driving under the influence.

“I also invited the council’s members to work with the Malaysian Road Safety Council to advocate for greater road safety awareness to make our roads safer.

“I also spoke about the way forward for a new high speed rail project between Malaysia and Singapore, and how all parties want it done on a clean slate, without hinging on the previously cancelled project,” said Dr Wee as he presented the government’s vision for regional connectivity.

Other than the proposed HSR to Singapore, both countries are currently building a cross-strait MRT from Johor Baru to Woodlands capable of moving 10,000 passengers per hour in each direction.

“In Malaysia’s continuous improvement to the public transport and logistics network, I also invited the EU-ABC’s transport infrastructure development members to participate in tendering for work packages for projects here as we are keen to leverage on European knowledge and expertise in these areas,” he said. 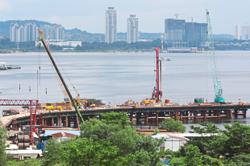