IPOH: Some 15 pieces of a body, believed to be that of an elderly woman's, were found in a sewage tank of a house in Taman Kerian, Parit Buntar, on Saturday (June 4).

Perak police chief Datuk Comm Mior Faridalathrash Wahid said the cut-up body parts were found by the police after receiving a report on the incident at about 3.30pm on Saturday.

"The state police contingent's forensics unit was also roped in to help with the investigation," he said in a statement Saturday.

"The victim has been identified as a 68-year-old woman.

"We also seized a machete, two knives and several other items believed to have been used when committing the murder," he added.

Comm Mior Faridalathrash said initial investigations found that the cause of the incident was due to the man's dissatisfaction with the division of inheritance by his late father.

"The suspect and the victim had been living at the house together for 12 years since the father died.

"The case has been classified under Section 302 of the Penal Code for murder," he added. 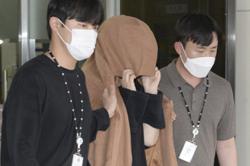