Many still waiting for Tamil school to open

SJK(T) Bandar Seri Alam school action committee and parents wanting to send their children to the new school hopes that it would begin operating soon.

PASIR GUDANG: The delay in the opening of a new Tamil school in Bandar Seri Alam here has caused serious concerns among the public, especially parents living nearby.

“At first, the school was supposed to begin operating in 2018 but for some technical reasons, it was delayed for two more years.

“It was then supposed to be opened in 2021 but the plan was delayed again following a landslide that affected the school’s fencing.

“It took about one year for repairs to be completed following the landslide and we were promised the Certificate of Practical Completion (CPC) from the Education Ministry in April or early May this year, but until now, we have yet to receive the certification,” he told reporters during a press conference outside the school yesterday.

He noted that the school had received its Certificate of Completion and Compliance (CCC) from the local authority.

“The existing Tamil schools in Pasir Gudang are already operating at full capacity. For example, SJK (T) Masai has more than 1,000 pupils.

“It is important for this school to open its doors immediately so that pupils can study comfortably, especially as there are about 20,000 Indians in Pasir Gudang alone,” he said, adding that some 300 pupils would benefit from the opening of the school.

He noted that students from existing schools nearby such as SJK (T) Masai, SJK (T) Permas Jaya and SJK (T) Pasir Gudang were also expected to move to the new school once it opens.

“Education is very important and we urge the ministry to issue the CPC as soon as possible.

“Parents are also getting restless and worried as they have been waiting for years for the school to open.

“The ministry has told us that we will be receiving the CPC next week but we are unsure if the promise would be fulfilled,” he said, adding that he hoped the school could be opened in June or latest in July.

“Currently, they are studying at SJK (T) Masai, which is quite far from our house. The school here is only about five minutes away, and we really hope that they could move here as soon as possible,” she said.

Taxi driver K. Aumaravall, 45, plans to send his five-year-old son to the pre-school here next year.

“My son will turn six next year and will be attending kindergarten. I really hope that I can send him here as it is near my house,” he said.

When contacted, Johor state education committee chairman Norliza Noh said she would have the state Education Department look into the matter as soon as possible. 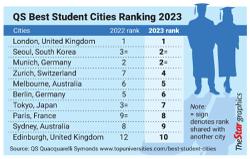