KOTA KINABALU: There is more than enough fresh chicken to meet the demand for the two-day Kaamatan celebrations beginning Monday (May 30).

Consumer officials monitoring the fresh chicken supply in the state said that based on checks with retailers and wholesalers, supplies of fresh chicken were easily available at major markets, supermarkets and grocery stores.

Inspection and monitoring of chicken supply including other basic necessities were done daily by personnel from the Domestic Trade and Consumer Affair Ministry in Sabah, its state director Georgie Abas said on Sunday (May 29).

He said that fresh chicken was being sold at reasonable prices and there was no need for consumers to resort to panic buying.

For Sabah, he said local poultry farmers and suppliers were still able to meet the supply in the local market unlike the situation in Peninsular Malaysia.

"There are 19 major broiler farms that can produce as many as three million chickens a month," he said, adding that there was an average supply of 100,000 chickens daily in the market.

He said there was an average of 100 to 300 fresh chickens supplied to major supermarkets in Sabah daily.

"Given the increasing demand for chicken wings during the festive season in Sabah, the government has listed chicken wings as a controlled price item under the Kaamatan festival maximum price scheme effective from May 27 to June 2.

Georgie also said that they were enforcing the maximum price determination for poultry and chicken eggs from Feb 5 until June 5.

He said a total of 58 cases were reported against traders in the state for non-compliance.

He said three of the offenders were caught selling controlled items above the maximum price, 51 involved failure to use a special pink price tag, and four other cases involved traders failing to display prices. 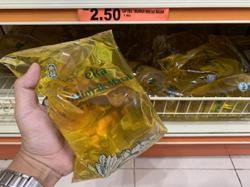