The king has returned: Durian orchard owner Lai Kuan Beng checking the fruits at his plot in Sungai Ara. — Bernama

GEORGE TOWN: Although borders have reopened, the export of frozen durian is expected to drop by 50% due to a lower yield caused by the wet spell during the flowering season.

Top Fruits Plantation managing director Dr Tan Sue Sian, 48, said international consumers would have to pay more for the king of fruits, with prices expected to be 40% higher compared with last year.

“All this is due to lower production volume, and higher labour and fertiliser costs,” he said, adding that frozen whole durians were scheduled to be exported to his top three markets – China, Singapore and Indonesia – by mid-June.

“This year, we are also venturing into South Korea, Japan and Kenya as we have orders from these countries.

“For our frozen durian export market, we usually supply them with cultivars like Musang King, D101 as well as D24,” he said, adding that locals prefer kampung durian compared with the commercially-cultivated ones.

“The Raub and Karak areas in Pahang were flooded and many flowers were washed away.

“We are starting to witness more flowering in the trees and we are looking forward to a reasonable price adjustment with higher yield.

“We have been exporting frozen durian since 2004, and our first container was to Brisbane, Australia,” he said, adding that the top three frozen durian buyers from him are from China, Hong Kong, and Australia.

Cheah said they would airfreight durians to Hong Kong, with the fruits collected from the farm in the morning.

“We will disinfect and pack them with ice gel before placing them into a foam box and sealing it.

“We will then send them to the airport and our customers will get to enjoy fresh durians that day itself,” he added.

Cheah said the durian harvest season in Raub would be pushed to the fourth quarter due to the rain and floods early this year.

“We have sufficient supply for the local market as we have many different species for our customers to choose from.

“Locals love kampung durian as well as branded ones such as D24 and Musang King,” he said.

Durian orchard owner Eric Yeap said frozen durian from his orchard would only be exported in July.

“For now, we have not exported frozen durians yet.

“Our main customers are from Hong Kong, Taiwan, and China and this year, we will be exporting to Brunei as well,” said Yeap, who started exporting fresh durians a few years ago.

“We ventured into airfreight during the movement control order.

“Since international borders were closed, we have customers requesting fresh durians.

“With greater connectivity via cargo flights, we get to fly our durians straight to our customers.

“In fact, I sent 300kg fresh Capri durians to Hong Kong on Tuesday by plane. The durians arrived fresh and we had customers waiting for them.

“The only problem was that all the fruits needed to be sent down to Kuala Lumpur, and it was time consuming,” he added. 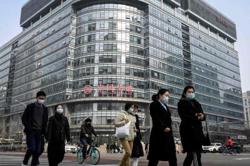