The Perak Mentri Besar said although the land was sold to a private company, full payment has not been made.

“The land has been sold... but there are still a few payments left, which is why the land is still under PKNP.

“While the initial plan was to build an airport, now that it has been sold, it is up to to the private company to decide what to do with (the land),” he told reporters during a Hari Raya Aidilfitri open house at the state Communications and Multimedia Department here on Wednesday (May 25).

ALSO READ: MB: MACC yet to reach out on alleged airport land sale

Earlier in the day, Parti Bumiputera Perkasa Malaysia (Putra) vice-president Datuk Hamidah Osman said the land should have been used to build the airport as it would benefit the public.

Hamidah also said she had applied for and received a caveat on the land from the state Land and Mines Office to stop any development work from being carried out there.

The issue of the land sale came to light during the state assembly sitting in March.

Saarani had said at the time that the land was sold when Pakatan Harapan was in power.

The sale is currently being probed by the Malaysian Anti-Corruption Commission.

Separately, Saarani said some 87.4ha of land had been proposed for a rare earth project identified as the "lintonite project" in Hulu Perak.

“The project has not started because we are still waiting for various approvals such as the Environmental Management Plan.

“We understand that there are many opinions regarding the project including from environmentalist groups but we hope they can understand that as a state government, we have a bigger responsibility," he said.

"Not only do we care about the environment, we are also responsible to find extra revenue for the state, which is why we need to use the sources given by God," he said, while giving an assurance that the environment would be preserved.

Saarani had reportedly said on Monday (May 23) that the project would be carried out on land owned by the Perak State Agriculture Development Corporation to boost state revenue.

He added that the new source is expected to be better than tin ore and could be used in mobile phones, watches and electrical items, among others. 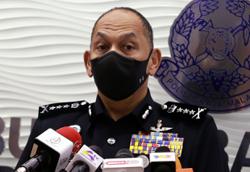