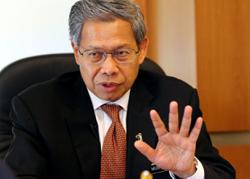 KANGAR: Perlis UMNO and Barisan Nasional (BN) are ready to go solo in the 15th general election (GE15) if PAS does not want to maintain political cooperation through Muafakat Nasional.

"There is no political cooperation between (Perlis) BN and PAS at the moment,” the state Umno liaison committee chairman told the media here Sunday (May 22) night.

Azlan, who is also Perlis Mentri Besar, said PAS seemed to have no concrete stand on whether to continue or end the Muafakat political cooperation by putting the blame on Umno through unnecessary statements issued by their leaders.

"However, it all depends on the decision of the top Umno leadership,” he said.Meanwhile, Perlis PAS commissioner Mohd Shukri Ramli said the Muafakat coalition still existed and he hoped that the cooperation could be further strengthened.

He said Perlis PAS hoped that the Muafakat coalition would continue to be defended to strengthen the unity of the ummah, especially in the state.

"Our relationship (in Muafakat) is still not over,” he told reporters after attending the Perlis PAS Hari Raya Open House at the state PAS Complex here Monday (May 23).

Shukri, who is also the Sanglang assemblyman, said negotiations on the matter at the central level were still ongoing.

"At the leadership level, we are still working towards unification and will not give up on continuing the Muafakat political cooperation which can create a harmonious atmosphere among society,” he said. - Bernama