PASIR MAS: The Royal Malaysia Police will continue its operation and investigation to identify the masterminds behind local and international drug smuggling syndicates through several Op Tapis operations.

"Until now, there are 2,100 individuals considered as ‘middlemen' (drug pushers) who have been arrested and further investigations are ongoing to arrest the real masterminds.

"We do not deny that drug-smuggling activities in the country have a link to international drug rings like in Kelantan where most of the drug supplies come from neighbouring countries,” he told reporters after visiting the Immigration, Customs, Quarantine and Security Complex (ICQS) and checking the operations at the Malaysia-Thailand entry point here Monday (May 23).

Ayob said of the 175 illegal bases in Kelantan, 134 of them were actively being used for smuggling activities.

Nevertheless, he admitted that it was indeed difficult to curb the smuggling activities as it was not only involved drugs, but other contraband goods.

"Therefore, during the visit, we have also discussed with the Customs Department how we could further increase our collaboration,” he said. - Bernama 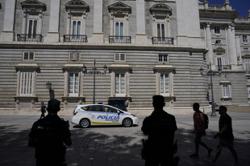