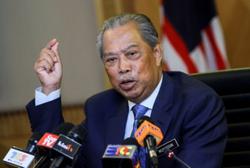 Dr Mahathir, 96, in a statement of defence filed Tuesday (May 17) through Messrs Haidir & Co, claimed that the five meetings between June 7, 2018, and Feb 25, 2020, took place at several locations, namely his residence in Mines Resort City, Seri Kembangan; Perdana Leadership Foundation, Putrajaya; and the Prime Minister's Office in Perdana Putra.

"During the period, the plaintiff (Ahmad Zahid) had indeed spoken to me about the criminal cases he was facing.

"Since I was still holding the position of prime minister and interim prime minister at that time (from 2018 to 2020), Ahmad Zahid had indeed taken the opportunity to be nice to me because the criminal cases could jeopardise his political career.

"So, that must have been the plaintiff's concern at that time and it was voiced to me," claimed Dr Mahathir in his statement of defence to rebut Ahmad Zahid’s defamation suit filed last month.

Dr Mahathir claimed that Datuk Seri Khairuddin Abu Hassan had posted on his Facebook account that Ahmad Zahid had asked him (Khairuddin) to arrange for a meeting with him (Dr Mahathir).

"Any sane individual with the intellectual ability to think reasonably can see that Ahmad Zahid, a politician who is facing criminal cases, has gone to see me, who at the time was holding an authoritative position, as an attempt to resolve the criminal cases confronting him.

In a suit filed on April 20, Ahmad Zahid stated that Dr Mahathir, who is Pejuang chairman, had issued defamatory statements with malicious intent against him at a Pejuang event at the Perdana Leadership Foundation, Putrajaya, on Feb 23, 2022.

The Bagan Datuk MP claimed that the defamatory statement meant that he was a person who used shortcuts to resolve and postpone the trial of his ongoing court cases and used his position to influence Dr Mahathir to interfere in his criminal trials and investigations by law enforcement agencies.

Meanwhile, Ahmad Zahid also filed an inter-parte application (both parties) for an interim injunction for the defendants either personally, through his officers and representatives to retract the defamatory statement and prevent them from publishing, distributing or disseminating the statement or similar defamatory statements on any social media platform.

The interim injunction application will be heard before Judge Datuk Rozana Ali Yusoff on June 17. - Bernama