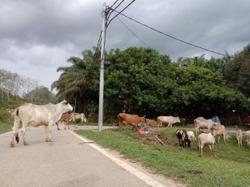 After much speculation over the party’s presidency, currently held by Tuaran MP Datuk Seri Wilfred Madius Tangau, Benedick announced on Monday (May 16) that he would challenge for the top post if Upko members wanted him to do so.

“I am not challenging anyone’s leadership but I intend to offer my leadership record in Kadamaian (where he is the assemblyman) to the party members.

“If they think my track record can become the new inspiration for the party and they feel the time has come, I am willing to take on that challenge,” he said.

The meeting was launched by Upko deputy president Datuk Donald Peter Mojuntin. Among others who were present were Upko secretary-general Nelson Anggang and the party’s Youth chief Felix Joseph Saang.

It was previously reported that Tangau was said to have been offered a “president mentor” position by senior party leaders and subsequently make way for Benedick to take over the reins.

The party polls are expected sometime in October this year. However, there has been no indication from Tangau over whether he was willing to step aside and allow for fresh leadership in Upko.

An aide to Tangau said that he is currently in the United Kingdom to attend his daughter’s graduation, adding the latter’s statement could be expected after his return to Sabah.

Upko’s constitution requires the contender for the presidency to obtain at least one-third, or nine, nominations from the 25 divisions.

Benedick, in his speech, added that many people had anticipated he would make the announcement to challenge for the top post today, with speculations particularly played up in the media.

“But it is up to Upko members to interpret my statement today. I am ready to take on the challenge if the respective divisions want me to steer the party,” he said.

Towards this end, the 40-year-old Benedick urged party members to be united, saying that Upko will not be able to contest effectively in the coming general election if they were divided.

“We will not be able to compete with the government bloc if we are not able to inspire (the people) in order to regain the support back to the party,” he said.