The Pontian MP said this was a unanimous decision made by the Umno supreme council following a meeting on Thursday evening (April 14).

“The Umno supreme council unanimously proposed for Ismail Sabri as its prime minister candidate for the coming 15th General Election,” he said in a statement.

Ahmad also said the Umno supreme council chaired by party president Datuk Seri Dr Ahmad Zahid Hamidi had decided that the Memorandum of Understanding between Putrajaya and Pakatan Harapan should not be continued.

However, Ahmad said Umno will continue supporting the tabling of the anti party-hopping Bill and it would not compromise with any parties trying to stall the proposed Bill.

“Umno’s stand is that the anti party-hopping Bill must be expedited in order to ensure the rights of voters,” he added.

Meanwhile, Ahmad said another Umno general assembly will be held on May 14 to carry out amendments to the party constitution in relation to its party polls.

“On the same day, there will also be an Umno anniversary celebration and a Hari Raya Aidilfitri reception,” he added.

On March 19, the Umno general assembly approved a motion to postpone the party election for up to six months after the 15th General Election is held. 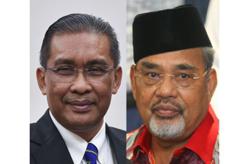