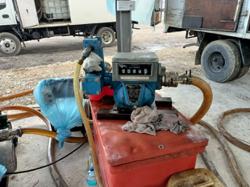 The GOF found and seized large fuel drums and tanks filled with subsidised fuel as well as diesel pumps during a raid at a premises in Jalan Perak, Taman Wawasan in Kulai on April 4, 2022.

KULAI: The General Operations Force (GOF) has crippled a diesel smuggling syndicate which had been operating for the past two years.

GOF Battalion 5 commanding officer Supt Dimin Awang said three locals and two foreigners were arrested during a raid at a premises in Jalan Perak, Taman Wawasan, here at around 2pm on Monday (April 4).

“We found large fuel drums and modified tanks able to hold 1,000 litres, 4,000 litres and 20,000 litres, respectively, and some were filled with subsidised diesel.

“We also seized five diesel pumps attached to hoses and two lorries at the premises.

The arrested suspects, aged from 34 to 42 years old, were handed over to the Domestic Trade and Consumer Affairs Ministry for further action, added Supt Dimin.

“The syndicate has been actively involved in the smuggling of subsidised fuel for the past two years in the Johor Baru area,” he said, adding that the case was being investigated under the Control of Supplies Act 1961.

He urged the public or those with information to tip-off the GOF at its hotline 07-755 7280 to combat such activities as well as the smuggling of contraband and illegal immigrants.