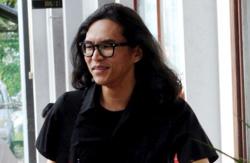 KUALA LUMPUR: Graphic designer Fahmi Reza has been charged again at the Sessions Court over alleged offensive posts on his social media account.

The freelancer, whose full name is Mohd Fahmi Reza Mohd Zarin, pleaded not guilty after the charge was read out before M. M. Edwin Paramjothy here on Thursday (Feb 17).

According to the charge sheet, Fahmi allegedly posted the offensive content with intent to annoy others on a Facebook page named "Fahmi Reza" at 11.45am on June 1, 2021.

The content, which was a poster that allegedly linked an Islamic political party with alcohol, was then read at an apartment in Bandar Baru Sentul at 9am on June 2, 2021.

Fahmi was charged under Section 233(1)(a) of the Communications and Multimedia Act 1998.

He faces a fine of up to RM50,000 or up to one year imprisonment or both and can be fined RM1,000 for each day the offence is continued after conviction.

Fahmi's lawyer Rajsurian Pillai however asked for a lower amount.

"The case does not involve any victims, violence or hurt.

"The most important factor the court should consider in deciding bail is that my client is not a flight risk. He came to court at 8.30am ready to face the charge," the lawyer said.

The court was also informed that Fahmi's electronic device has been confiscated by the court.

"The accused has already been charged before and given bail at RM5,000. So his money is tied up there.

The case is set for mention on March 30.