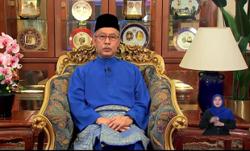 KUALA LUMPUR: The government has, in principle, agreed for Radio Televisyen Malaysia (RTM) to negotiate with the agent appointed by world football governing body FIFA to obtain broadcasting rights for the 2022 World Cup.

Communications and Multimedia Minister Tan Sri Annuar Musa (pic) said the decision regarding the negotiation would be known soon.

"InsyaAllah we need a little more time to finalise it (the negotiation) but surely RTM will be one of the channels that will air the 2022 World Cup," he said after launching the Jakel-RTM sponsorship collaboration ceremony here on Monday (Jan 31).

He said this when asked regarding developments in obtaining the broadcasting rights for the 2022 World Cup.

Commenting on media access for parties contesting in the coming Johor state election, Annuar said the government had agreed to go with the model used or the Melaka and Sarawak polls, with improvements done to provide space for candidates to use the channel provided by RTM as a medium to introduce themselves.

He said this method aimed to provide voters with access to information to get to know the candidates who would be contesting and, subsequently, help them make a decision.

"The government agrees to let its radio and television channels give space to assist the candidates in an appropriate manner, just like in the Melaka and Sarawak polls.

"As it is a state election, we cannot fully utilise the television air time because television broadcasting is national broadcast... radio, meanwhile, is localised broadcasting for each city like Johor Baru and this can be further enhanced to provide space for the candidates," he said.

The Election Commission (EC) was expected to announce the Johor election date after holding a special meeting on Feb 9.

On the Jakel-RTM sponsorship collaboration, Annuar said: "I hope such cooperation can be further expanded in the future so that RTM will continue to remain at the top and be the number one choice for all of Keluarga Malaysia in line with the RTM Transformation Plan 2021-2023.

The Jakel-RTM sponsorship collaboration would see a strategic cooperation in the sponsorship of the RTM Berita Perdana newsreaders’ clothes for six months from Feb 3 daily for the 8pm news programme over TV1. - Bernama