‘I didn’t kill anyone, I am the victim’

SEREMBAN: A former independent candidate in the 2018 Port Dickson parliamentary by-election turned rowdy when she was charged with killing her husband here.

“I didn’t kill anyone. I am the victim but am now facing the murder charge.

“Remember my face and words. I didn’t kill anyone but they are investigating me for murder and that is not fair,” a tearful 55-year-old Lau Seck Yan shouted at reporters as she was led into the Magistrate’s Court here yesterday.

After being charged with the murder of 55-year-old Poh Seng Hiap, she continued her tirade as she was led away. “Trust me, I didn’t do it,” the handcuffed former private university lecturer said.

The accused went on to claim that “he pushed me” and said that just because her husband died, she had to face the consequences. The charge was read to Lau before magistrate Norzaliza Tesnim and although no plea was recorded, she was heard saying: “Tapi saya tak buat (but I didn’t do it).”

The mother of four girls was accused of committing the offence at their bungalow at the Rasah Kemayan Golf and Country Township between 3.30pm and 4.30pm on Jan 23.

Poh had worked as an accountant in the private sector.

Ng Kian Nam, who represented Lau, asked the court to send her for a psychiatric assessment but Norzaliza said this was not necessary yet.

Deputy public prosecutor Hafizah Zainul Hashimi said she had yet to get the post-mortem, toxicology and chemistry reports.

Norzaliza then fixed Feb 25 for the next mention.

No bail was offered because the offence is non-bailable.

Ng said Lau’s children were unable to be in court as they had to attend Poh’s funeral.

According to earlier reports, Seremban OCPD Asst Comm Nanda Maarof said that the victim had stab wounds in his chest and abdomen.

He said police had received a call from the victim’s 18-year-old daughter. Two of the victim’s children witnessed the incident. 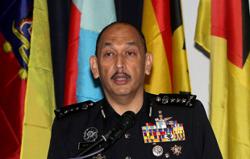 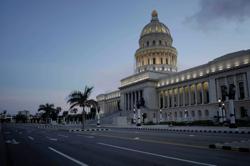 Police reclassify alleged journalist assault case
Made to work only to be deceived
Concerted effort by agencies to combat online scams
‘Water surge not due to logging’
Guardians being probed for niece’s murder
‘Don’t penalise short-term rentals’
SMEs unhappy with longer paternity leave
Weekly cases jump 119%
Seven days more than enough, say some dads
Getting the itch to travel again